What? Sixty people on stage? Thirty bodies in close-knit, full-pelt, intimate, sweaty co-operation; another thirty faces with wide open mouths singing their lungs out? This exhilarating spectacle is the stuff of lockdown dreams: a massive embodiment of our primal hunger for community and physical touch. Audience, acrobat and choir fuse into a single organism for a moment in time.

Gravity & Other Myths brings together all three of its core ensembles plus a choir of 30 voices from Young Adelaide Voices Aurora and senior members of First Concert Choir. Featuring and directed by YAV’s Artistic Director, Christie Anderson. 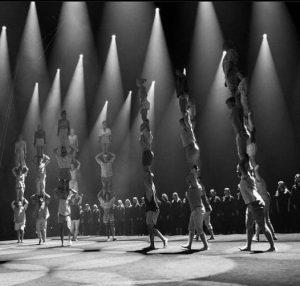 ‘The 30 acrobats – circling, pacing and spinning as they form complex human geometry and fling themselves into impossible positions – interact with the 30 singers who are also constantly on the move. Stretching and catching, performers stack themselves one on top of another to form towers that merge into even larger constructions.

The group’s partnership with Aurora for The Pulse  is inspired and results in a theatrical experience that induces plenty of goosebump moments.

Aurora, directed by Christie Anderson, is the senior vocal ensemble of the South Australian youth choir Young Adelaide Voices. The choir is no stranger to boundary-pushing works, with a diverse performance record that includes former Adelaide Festival productions, sharing the stage with the Rolling Stones and appearing as guest artists at the Desert Song Festival in Alice Springs. Aurora’s commitment to performing contemporary Australian music means they’re a perfect match for The Pulse.

This all-Australian production marries brute strength with intricate choreography and singing that at times elevates the work to the sublime. The solo and group sequences, at times wild and loose, at other times restrained and tightly controlled, sometimes evoke a sense of ritual.’

Interwoven amongst all the physicality was the Aurora Vocal Ensemble. Not just relegated to the back or side of the stage, they were embedded within the action all the while providing a complementary soundtrack. Their inclusion evoked sentiment and brought equilibrium to an, at times, chaotic atmosphere while elevating the overall production.

The Pulse features a cast of 30 acrobats whose physical prowess is matched live on stage by the vocal dexterity of Aurora, the 25-strong senior vocal ensemble of the choir, Young Adelaide Voices.

With circus performers clad in white and off-white, and the choristers in black, a simple, striking duality is created on stage, with bodies herded, gathered and fluidly choreographed to create a sense of opposition and division, of coming together and communal exchange. Performers circle and pace, flow together and sweep apart, sometimes standing alone before being caught up again in the whole, all the while accompanied by the choir’s commentary and song.

The cohesive integration of live music, exquisite lighting and exceptional circus skills result in a series of memorable and dramatic sequences – a performer stepping off a high staircase of bodies into the unknown; an acrobat’s gibbon-like brachiation through a forest of bodies; a single artist first echoing then exaggerating the movements of choral director/conductor Christie Anderson. Moments of broad comedy (including a memorable rendition of ‘Mary Had a Little Lamb’) are contrasted with gasp-inducing sequences of physical prowess.